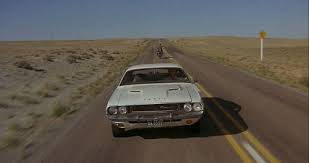 DO YOU HAVE WHAT IT TAKES?

Do you have what it takes to catch Kowalski
or to elude Lt. Frank Bullitt? They’re waiting
at www.lilgoat.com for you to give it your best
shot…

If you happen to be a cop you’ve better be on the
lookout for a white 1970 Dodge Challenger with
Colorado license plates OA5599, however, Kowalski
means no offense and nothing personal by leaving
you in the dusts. He’s just doing what he’s gotta’do.
So, in other words,
OPEN THE ROAD FOR KOWALSKI!!!

On the other hand, if you’re a bad guy with no morals,
a highland green 1968 Mustang GT fastback with
California plates JJZ-109 will be hot on your tail
from Columbus Street to take you down Taylor or
anywhere. Bad guys, you’ve gotta’ sweet 1968 Dodge Charger
but don’t waste his time because, Lt. Frank Bullitt just
plays it and calls it as he sees it, so don’t play him for
a sucka’ or a fool!!! Get the picture?
Then get right and
come on with it if you think you’ve got something…

THEY’RE WAITING FOR YOU
AT:
www.lilgoat.com
Copyright © 2002 Mark Turns.

A BREAK OR IN MOTION

Whether Kowalski is taking a cigarette
break or in motion through Nevada-
The Dodge Challenger’s
radio can really hear soul and Tracy Chapman
singing: “Give me one good reason” inspite of
all the trouble that Kowalski is already in-
Person to person, what time
is it? SuperSoul can feel the sunrise that
Kowalski doesn’t already know about…

Turn on CBS to get the story
and mystery theatre of Kowalski…
E.G. Marshall,
The Guess Who Music…
Sunglasses and walk away
cool from a crime after the explosion…
E.G. Marshall and Kowalski-   his freedom
is before the angel comes…

TINTED ARE THE LINES

Tony Joe White-  1968 Torino
future illusions of Kowalski
drive along the wisdom road
with images and traces-
Rainy colors-
No flavor if it were sweet, but no rain
touches long curly hair-
Muddy green,
Johnny Taylor-  black with a touch of
blue tint are the lines until Saturday
evening in the blues-
Pure middle of the
street obsession…

Rich church choir gospel sing Kowalski
has made it to his destiny-
Love and
spirit of God in time, what do you do
once the Vanishing Point is gone?…

You wanna’ feel right?….
Dreams picture Kowalski driving
Tommy James, Draggin’ the line-
calm mature stature….
Pistol-grip freed to us our energy as to
our calm why we’re here in the first music…
Soul now rests in his hand…..

A man in a white Challenger made
sense with any destiny stopsign–
From others who never knew
starting from the tracks seen two days
earlier- mystery theatre is the bright
sun along the highway…
Nightfall echo from
taillights, I must go to see the darkest
ends vanish- just review to keep his
promise rock to the sun…..

A GAME OF VANISHING POINT

Play a game of Vanishing Point, is time
against the clock-
Kowalski and Super-Soul
fame mystery theatre odyssey-
Mopar vengeance that Dodge Challenger
only knows the distances of time- Midnight
confession- heavy metal of a distant light….

The “Immigrant Song” by Led Zepplin… The songs
and music of The Guess Who- “No Sugar Tonight”,
“Hand-Me-Down World” intertwine with Vanishing Point…
A pistol-grip speed mystery and sunglasses late night
illusion and time, is our freedom sun, headlights and
dusk promise rock to the sun….

PERFECT FOR A FILM

Alanis Morissette and her song is
also the tone of Kowalski and his
1970 Dodge Challenger-
Pistol sunshine
afoul of the law rides mystery theatre
Vanishing Point again-
sound that needs
no introduction…..

While Sugarloaf sings Green-Eyed Lady-
sunglasses amber-  Kowalski-
The Guess Who sings “No Sugar Tonight”
and his Challenger can see amber white-
the purple sun before the
dusk firefall-   speed mirrors can speak
shadows without a sound….

A HUSTLE TO A SONG OF VANISHING POINT

Curtis Mayfield and Kowalski on a straight away illusion-
1971-  The song: “Where Do We Go From Here”…
Superfly is the song on the radio to hustle the police on a
pistol-grip allude with no violations of a sound-track ticket-  allude
with music, go for a dip in the ravine…
Hustle send me a message to the Dodge Challenger-   Kowalski
sure can fly and see…   1971 SuperSoul spiritual-    all the movie
music knows the beginings to groove this song-  hustle his pride,
he doesn’t stop….
Curtis Mayfield and Kowalski knows that the
clock of time with purity and speed has a mind of it’s own-
No guesses are wrong…
Jake has Kowalski’s fix-
Vanishing Point taillights-   the clock is just a few minutes after
midnight to disappear…

GOING THROUGH THE TUNNEL

Saturday’s sunshine takes Kowalski through the tunnel
on the beat of “Sha-Na-Boom-Boom.”…
The Staples Singers
push him on “Heavy Makes You Happy”.
Spiritual Saturday
and sunshine, where are you going Kowalski?…Coming the
Vanishing Point, pleasing the angel that comes from another
place…

Left foot toe in and toe out-    hand to fist glove,
bare-hand shift the pistol-grip…   accelerate straight away
at the right time, straight way, while at the same time, say it’s
a joke but it’s not so mellow to dream gone straight away and take
a dip as too, The Steve Miller Band sings “Livin In The USA”…
Pistol-Grip, time to add one more song-  somethin’
you should know-   Love and unity…  Kowalski straight borrow
some speed from the chopper-
440 Six-Pack, straight away
accelerator disappear to drag the chain on the the road
stopsign behind him-        Just say the truth because, Lord knows,
the police can’t catch him….